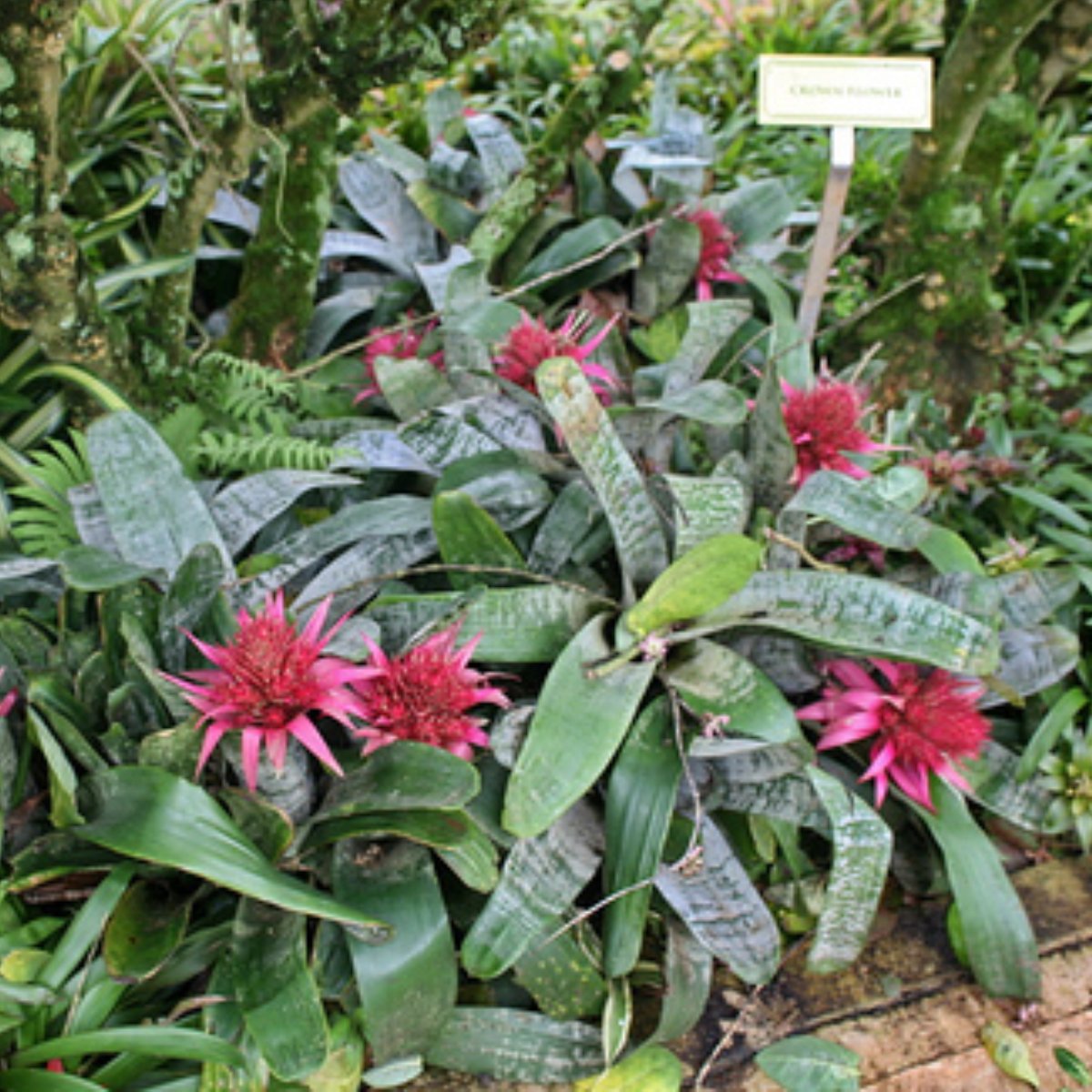 Distribution and habitat: Aechmea fasciata is a species of flowering plant in the bromeliad family, native to Brazil where was found in mountain forests at about 550m (1,800 feet) above sea level. Aechmea fasciata is epiphytic plant, which means that in the wild it grow on other plants usually trees but is not parasitic upon them. It is air-feeder, collecting nourishment from water and decaying mater in the upturned cup of their leaves. Aechmea fasciata do not really use their roots other than for anchoring.

Aechmea fasciata have adapted to their environment and are always arranged in a rosette, shaped to capture and hold the water.

The Aechmea fasciata flower only mature and only once from each rosette, after which the rosette slowly dies. The foliage and colourful inflorescence remain decorative for several months after the small blooms have faded, however. During this period offsets appears around the base of the old rosette.

Description: Aechmea fasciata has arching, grey-green, spiny leaves which are cross-banded with sprinkling of white powder and can attain a length of 60cm (24 inch).

When fully mature (usually after three or four years' growth), the plant send up strong flower stalk bearing a pink inflorescence up to 15cm (6 inch) long. The large inflorescence consists mainly of bracts from between which emerge small, pale blue flowers that soon turn red. These disappear quickly, but the pink bracts remain decorative for up to six months.

Houseplant care: Aechmea fasciata is the most popular Aechmea. Many indoor gardeners stimulate natural conditions by growing these bromeliads on attractive 'epiphyte branches'.

After a Aechmea fasciata has flowered, the offsets can be removed for propagation. In case that propagation is not desired, make room for the new rosette to develop in original pot. This is easily done by using a sharp kitchen knife to cut off the old rosette at the lowest possible point when it has become shabby and started to wither. Pots containing two or more rosette can be exceptionally decorative.

Aechmea fasciata is an easy to grow plant.

Light: Potted Aechmea fasciata grow best in full sunlight. They will not flower successfully if kept at a distance from a sunny window.

Temperature: Aechmea fasciata like temperatures of over 15C (59F), coupled with high humidity throughout the year. Pots should be stood on trays of moist pebbles. Aechmea fasciata tolerate cools positions and dry air and it can survive short periods of cold.

Watering: Water moderately, enough to make the potting mixture thoroughly moist, but allow the top 1cm (0.5 inch) to dry out between waterings. In addition, make sure that the cup-like centre of the plant have a constant supply of fresh water.

In hard-water areas it is advisable to put Aechmea fasciata out in the soft rain from time to time (but only in mild periods); hard water disfigures the leaves by building up lime deposits.

Fertilising: Except in midwinter, provide half-strength liquid fertiliser once every two weeks. Apply the fertiliser not only at the roots, but over the foliage and into the central cup.

Potting and repotting: Use an equal-parts mixture of leaf mold, peat moss and coarse sand. Aechmea fasciata do best in small pots. The 13cm (5 inch) pot size suffices for a mature Aechmea fasciata. Repotting, if done at all, should take place just as new growth begins.

Gardening: Within its hardiness zone, Aechmea fasciata is growing best in partial shade in moisture-retentive but well-drained soil. It makes a handsome ground cover. Place individual plants about 45 to 60cm (18-23 inch) apart for an effective ground cover. A ground cover or mass planting ofAechmea fasciata in front of a green-foliaged shrub grouping which branches to the ground make a nice, bright accent for a partially shaded spot.

Aechmea fasciatais a good container plant in a cool climate and can be taken inside before the first frost. Always, when grown in the garden choose a spot in dappled shade under trees.

Propagation: When the offsets that appears around the base of the plant are about half the size of the parent plant, they can be cleanly detached - preferably in spring - and potted in 5-8cm (2-3 inch) pots of the recommended potting mixture for adult Aechmea fasciata. If an offset has already produced roots of its own, they should be retained. For roughly the first four months, each little plant should be kept in bright but filtered light and should be watered very sparingly - just enough to keep the potting mixture barely moist. When it is well-established, the young Aechmea fasciata can be moved into direct sunlight and be treated as a mature specimen.

Problems:
Brown tips on the leaves may be due to insufficient water in the vase of the plant, lack of humidity in the atmosphere or to the use of hard water.

Overwatering of the compost may cause rotting - keep plants moist but never wet.

Aechmea fasciata's problems include mosquitoes which may breed in the trapped water in the leaves. To avoid this, keep clean the water from the leaves vase.

Use:Plant enthusiasts grow Aechmea fasciata for its ornamental leaves and long-lasting pink blooms. It is is often the first plant in any bromeliad collection.

Aechmea fasciata can be successfully grown epiphytically or without soil, with moss around its roots and wired to the branches of rough-barked trees where its cupped rosette will catch needed water. Along with other bromeliads, Aechmea fasciata look attractive on an epiphyte branch, anchored down by heavy stones.

Aechmea fasciata will purify the indoors air by removing formaldehyde from it.