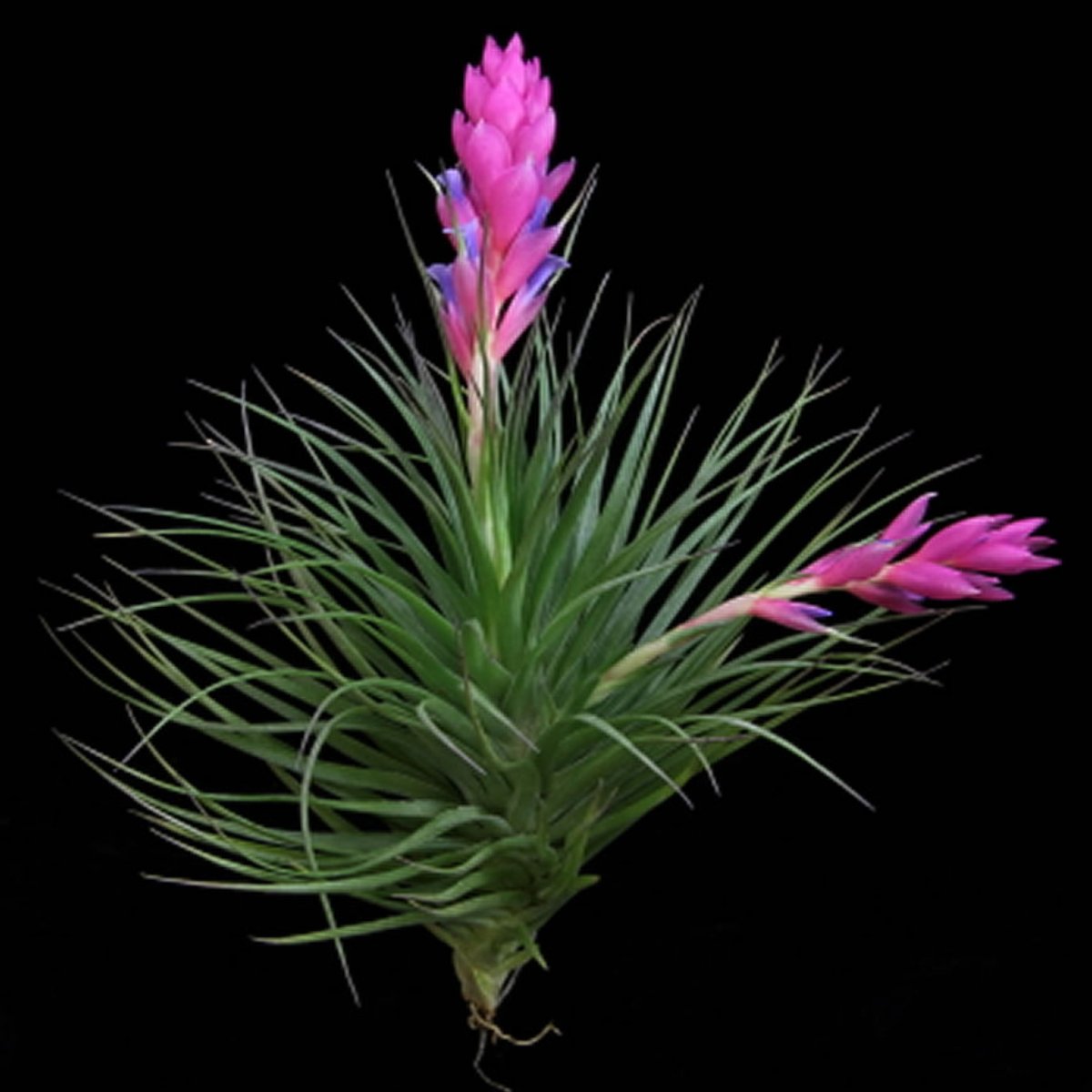 Distribution and habitat: Tillandsia stricta is native to Venezuela, Trinidad, Guyana, Suriname, Brazil, Paraguay, Uruguay, northern Argentina, growing either on both the sands of beach dunes and in trees in the foothills of the Atlantic Range. This means that this plant has adapted to lots of different climates and would have leaves to match this diversity.
Despite the fact Tillandsia stricta is typically an epiphyte, growing upon another plant to collect light, water and nutrients, it is not an parasite plant. These plants use their roots only to anchor upon their host and they rely solely on leaves to absorb water and nutrients.

Description: Tillandsia stricta are evergreen, clump-forming, short-stemmed, epiphytic perennials with leaves arranged into thick rosettes. They are a compact species to about 10cm (4 inch) across. There is a large number of variations that can be found in Tillandsia stricta plants: from soft leaved specimens to much harder, stiffer types and different coloured forms from light green leaves to silvery leaves and even verging on black. In early summer, they produce, when mature, bright red or bright rose bloom spikes with bright blue flowers. The spike is first held upright but then droops as it lengthens. The actual flowers are not long-lived, lasting for about a day at best, before it starts wilting, but the colourful bracts remain attractive for up to 10 weeks.
Tillandsia stricta hard leaf is one of the most vibrantly colored blooms in the genus and form a wonderful clump over time. The forms ofTillandsia stricta with gray-scaly, pale green leaves are adapted to take more sunlight than the green forms.
Tillandsia stricta plants, like other airplants, have little or no roots and absorb most or all of the water and food through their leaves. The eventual roots are used by these plants only to attache themselves to rocks or tree hosts.
The origin of this plant's scientific name epithet (stricta) means 'erect' and describe the upright habit of this plant.

House plant care: Tillandsia stricta, after the initial introduction into their new home (about a month), have a much better chance of surviving in home condition than a potted plant. These plants are extremely adaptable, require low maintenance and can withstand some time of neglect.

Light: Bright filtered light is the general rule forTillandsia stricta plants and the higher the humidity of the air the higher light will be tolerated. Place them at no more than 3m (10 feet) from the window. Direct sunlight may cause sunburn and leave unsightly marks on plants.
Tillandsia stricta can be grown in artificial light. Full spectrum artificial light (fluorescent) is best. The plant should be placed no further than 90cm (35 inch) from the fluorescent tubes and can be as close as 15cm (6 inch). A four-tube 122cm (48 inch) fixture works well. Bulbs can be any full spectrum type. Incandescent bulb are not suitable for plants grow lights. Provide 12 hours light per day.

Temperature: Optimum temperature range for Tillandsia stricta is 10 to 32C (50-90F). They also need moving air, not closed stale conditions. During the summer it is recommended to move this plant outside, in a shaded position to benefit from fresh air.
If Tillandsia stricta is kept in a terrarium, make sure they have air openings and is not placed where sunlight could magnify heat through the glass housing. An occasional placement in an shady outdoor place for a day can revive it.

Watering: Thoroughly wet Tillandsia stricta once a week; more often in a hot, dry environment; less often in a cool, humid one. Soak them (fully submerged) for 30 minutes to an hour, then shake them and allow to almost completely dry before replacing them in their globe or any kind of enclosure. If the plant is boasting a flower bloom, do not submerge the actual flower (just the body of the plant) as the esthetic appeal of the flower is permanently compromised.
Do not use distilled water or softened water. Filtered water, tap water that has sat long enough for the chlorine to dissipate, bottled water are fine. Pond water, aquarium or rain water are all preferred.
Plants should be given enough light and air circulation to dry in no longer than 4 hours after watering. If the plant dries within a very short period of time, it is not hydrating at all.
Spray misting is insufficient as the sole means of watering but may be beneficial between regular waterings in dry climates to increase the humidity.
If the plant is in a shell, be sure to empty the water out. Tillandsia stricta will not survive in standing water.
It is much better to water in the morning than at night. Airplants absorb the carbon dioxide from the air at night instead of the day time. If the plant is wet, it does not breath therefore, unless it can dry quickly at night, plan on morning baths.

Feeding: For Tillandsia stricta plants fertilising is not vital. Occasional fertiliser in water will speed up the growth, reproduction of pups and gain a more vibrant bloom. Apply a water soluble foliage fertiliser at quarter strength recommended on the label only during the warm months of reproduction.

Mounting: Tillandsia stricta can be grown basically anywhere, on rocks, in a seashell or on coral, in ceramic or pottery, attached to wood, but first should be considered how the plants are going to be watered. Also they should placed in a position accordingly with plants need for light. The following attaching materials are suitable to be used in air plants mounting: waterproof glue, plumbers glue, goop, shoe glue, Tilly tracker, fishing line, twisty ties, strings or even nails. Only use nails and stapling to tie around the plant. Nailing or stamping through the body of the plant will kill it. Also, do not not use superglue or copper wire as these will kill the plant.

Propagation: At the base of the mature plants will appear one to three pups or young plants that will grow to replace the mother plant now blooming that will degrade and die soon after. They will take a year to grow as large as their mother. The plant will multiply during the year with simultaneous blooms in a whole clumping community. The clump can be left to continuously grow or separate one or more pups to start new families. It is important to allow the pups to grow to 1/3 or half of the size of the original plant before removing it from the parent plant. To separate the pups, grip with one hand the base of the mother and the base of the grown up pup in the other hand and tug apart with a slight twist. It should be easy to separate them and will not hurt the plants.
Tillandsia stricta is one of the fastest growing tillandsias from seeds. There are many cultivars of this species. Tillandsia stricta has been used in hybridization with other species such asTillandsia albertiana andTillandsia recurvifolia to obtain new hybrids that exhibit characteristics of both species.

Gardening: Tillandsia stricta are curious plants that may be grown outdoors as long as temperatures do not drop below 7C (45F).

Position: To grow Tillandsia stricta, locate this plant in a well ventilated place where there is under a shade with lots of indirect daylight and protection from hot sun. A brief morning or evening sun - about 1 hour - is fine especially for the northern climates.

Irrigation: In temperate climate with some humidity, Tillandsia stricta hanging in a tree may never need to be watered. Otherwise outdoor plants can be sprayed with a water hose twice a week for 5-6minutes and let to dray in plenty of day light. Misting them once a week is helpful but is not a substitute for soaking.
If grown outdoors, keep dry during winter.

Fertiliser: From mid spring through fall, mist daily and once a month, mist with quarter strength water soluble fertiliser.

Problems:
Do not plant Tillandsia stricta in soil and do not allow them to stay wet for long time as they are prone to root.
Treatment: Rotting areas on plant need to be removed to prevent spreading the rot.

Most commonly, Tillandsia stricta die as a result of water setting in the centre of the plant for too long.

Under-watering is evidenced by an exaggerating of the natural concave curve of each leaf, void of vitality or brown tipped leaves.
Treatment: Soak the plants as indicated on watering section.

Lighter colour in leaves is a sign that the plants needs more daylight.

Note: Tillandsia are some of the oldest members of the plant kingdom. This genus includes over 600 species. Not all of the 600 plus Tillandsia species are easy to maintain and cultivated as ornamental plants. On average, there are approximately 40-60 species available for sale and an appreciable number of hybrids and cultivars.

Buying tips: Steps that should be taken upon arrival of new air plants are the following: To reduce the plant stress, give them a bath for about 20-30 minutes. Simply soak them in a bowl of lukewarm water. Next lay them out to dry completely. Then they can be planted in a glass terrarium, mount them on a wall display or use them in other arrangements. The unsightly roots, if any, can be cut off and the brown leaves can be peeled off.
Do not fertilise plants for three weeks following their arrival, but be sure to follow directions for light and water.

Holidays: To leave alone the plant for over two weeks, soak Tillandsia stricta in water for 12 hours before going in holiday and again for 12 after returning from holiday.
Another option is to set them outdoors in all day shady area where the automatic water sprinkler system can water them twice a week.

Uses and display: Tillandsia stricta plants are suitable for epiphyte branches. They can be displayed to grace a tabletop, adorn the walls, drape across windows or nest among other plants. Tillandsia stricta grown in glass globes are becoming very popular and trendy way to display. Outdoors, growTillandsia stricta plant in dappled (partial) shade mounted upon a tree branch or crotch where it receives natural rainfall and has good air circulation. Use it as a tropical hanging basket specimen or as a companion to orchids in slatted wood trays. It can be grown upon a pot of coarse tree bark nuggets when young. Once it clumps into a rounded cluster, it can be set on a tray or table outdoors in frost-free regions.
Tillandsia stricta way of displays are unlimited from a single plant to collections of Tillandsia plants, from terrariums and holders to more natural mounts, from vertical gardens to container gardening or gather many of Tillandsia species together and frame them in a painting-like fashion.