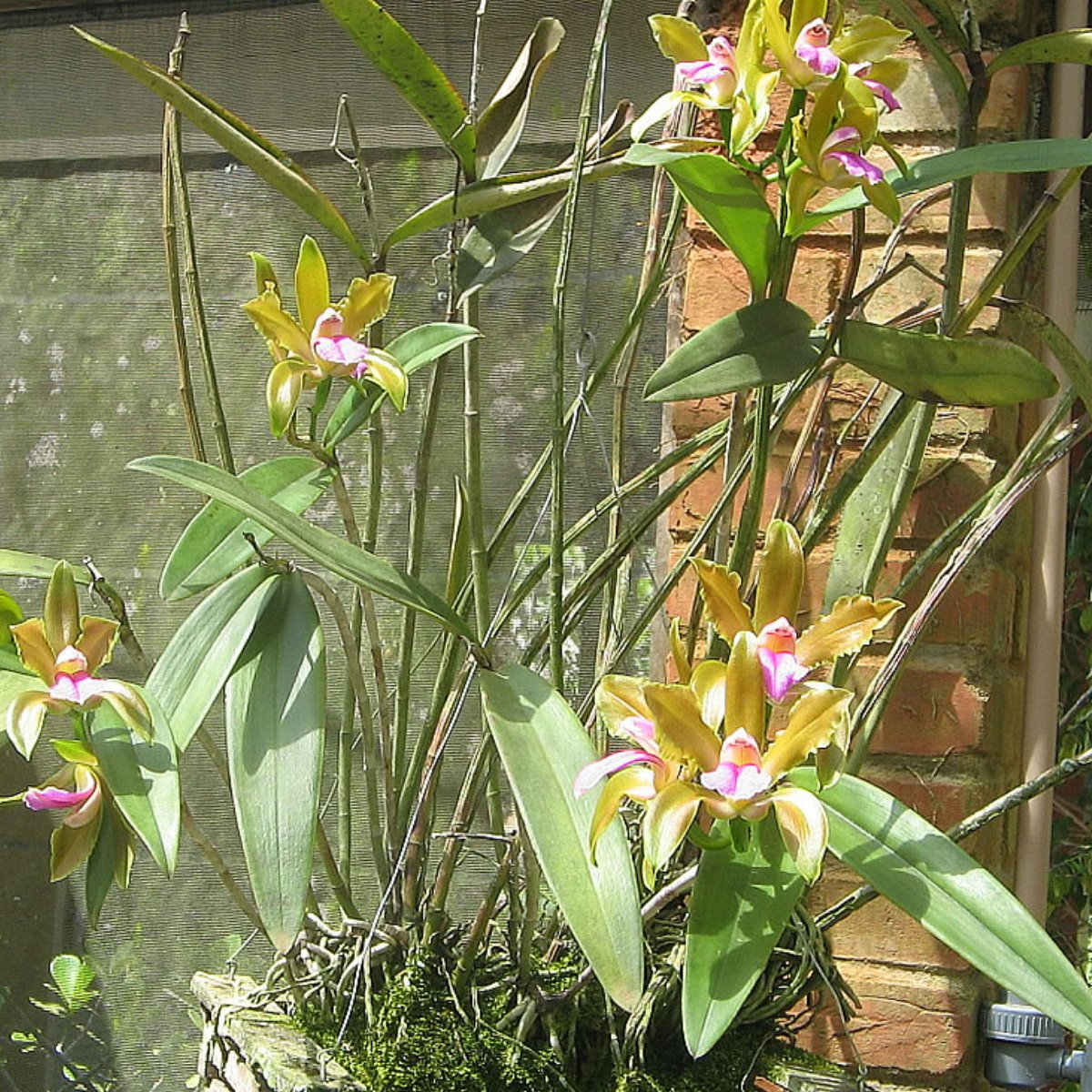 Distribution and habitat: Cattleya bicolor is native to Brazil where is occurring in different habitats. Typical, it is a species of epiphytic habit, but can also be found in earthly form growing on leaf litter and fallen pieces of wood of trees in forests, usually near rivers or swamps. In some regions can also be found growing on rocks. Also, it is found in savannah areas always between 500 to 1200m (1600-3900 feet) above sea level. When it is growing in savannah areas, does not tolerate direct sunlight, always growing in places where is protected from direct sun light and have good ventilation.
Some orchid growers are classifying Cattleya bicolor in different subspecies according to the state where they are found, but in fact it is the same species regardless of their morphological characteristics.

Description: Cattleya bicolor can grow to be a large robust plant and the larger the plant, the more flowers will be produced per spike. The slender stems are from 45 to 75cm (18 to 30 inch) high, jointed and covered with whitish membranaceous sheaths, bearing two leaves about 15cm (6 inch) long. The inflorescence is nearly erect, with 2 to 5 or more flowers. Flowers range from 8 to 10cm (3-4 inch) across. The sepals and petals are fleshy, with a distinct midnerve, greenish brown to olive-brown spotted with purple, the petals somewhat wavy, the lateral sepals bowed inward. The lip is wedge-shaped, without side lobes, curved downward with a central longitudinal depression or line, crimson-purple, occasionally with white margins. This species is unique in lacking the lateral lobes of the lip, a character usually inherited by its hybrid progeny, limiting its value in breeding. Variable in coloring, particularly with respect to the lip, this species blooms during spring and into midsummer, occasionally blooming twice, in spring and again in fall.

Houseplant care: Cattleya bicolor can be grown in a pot or basket and also mounted. It is a very demanding plant with respect to moisture and aeration of its roots, making its cultivation a little more complicated then other houseplants.

Temperature: Warmth is essential. The minimum tolerant for Cattleya bicolor is in between 12 to 15C (54-59F). Protect this plants from sudden changes in temperature. For adequate humidity stand plants on shallow trays of moist pebbles throughout the growing season and mist-spray them daily whenever the temperature rises above 21C (70F).

Watering: During the active growth period water plentifully, but allow the potting mixture to dry out almost completely between waterings. During the six-week rest period that Cattleya bicolor take after flowering, water the plants just enough to prevent shriveling of the pseudobulbs.
Mounted plants will need daily watering during the warmer months. The roots prefer a wet-dry cycle, so should be allowed to dry quickly between waterings. Plants seem intolerant of continually wet conditions around the roots hence the need for excellent drainage. Good air circulation is important at all times as well as high humidity during the warmer months. In winter plants need a drier rest with reduced watering. Occasional applications of water or misting of the roots in the mornings of sunny days will ensure that the pseudobulbs do not shrivel excessively.

Feeding: Give a foliar feed with every third or fourth watering during the active growth period.

Potting and repotting: Cattleya bicolor are best grown in pine bark mixture. At the end of the rest period move the plants into pots 5cm (2 inch) larger if leading growth has reached the rim of the current pots. Repotting should be only necessary every 2 or 3years. Place the old part of each plant against the rim of the new pot so that there is room to forward growth and gently firm down the fresh potting mixture around the rhizome and roots. Water the potting mixture plentifully. Then move the repotted specimen into medium light for a week or two before exposing it to bright light. After the maximum convenient pot size has been reached, divide the plant as suggested on propagation section.
They grow well in clay pots or baskets of wood because they need good roots aeration. Also this species can be grown mounted on a piece of wood or a tree branch.

Gardening: Cattleya bicolor is one of the easiest and most popular orchids to grow. These orchids are suited to intermediate conditions - 21 to 27C (70-80F) during day time and 13 to 18C (55-65F) during night. In areas where these temperatures are met more or less, these orchids can be left in place all year. In these areas, with some protection from excessive sun, wind and rain, the orchid plants can be successfully cultivated on the patio or as a part of the landscape. Where frost or temperatures fall below the recommended ones, the plants can be brought into the home to be grown on windowsills, under lights or on an unheated patio where the coldest temperatures are avoided.
Cattleya bicolor are usually grown in clay pots or baskets of wood. Alternatively these plants can be grown epiphytic mounted on trees branches.

Position: In their natural habitat, Cattleya bicolor grow and flower best in strong dappled sunlight. The most common cause of failure to flower is insufficient sunlight. Foliage should be a medium olive green. If light is sufficient the leaves will be weak and floppy and very green. If the foliage is more on the yellow side and quite hard, the plants are receiving possibly too much light.

Tree mounted epiphyte: Choose a tree that allow adequate light. Quercus species (oaks), Citrus species, Callistemon viminalis or Callistemon citrinus (bottlebrush), species from Arecaceae family (palm trees), Brassaia actinophylla (schefflera) and the less-common Crescentia alata (calabash) are prime candidates. Species of Ficus genus often casts too much shade. Rough bark is an asset, though not essential for success.
Begin to attach Cattleya bicolor orchids to trees when root activity on the orchids starts (usually the regular potting time). Set the plant directly on the trunk or limb; do not apply a pad of sphagnum moss, osmunda or other medium. Doing so may keep the surface too wet and induce rot. The roots have the ability to cling to the host. Use cotton string that will eventually decompose and not harm the environment. It fades in a few weeks, blending in with its surroundings, and the plant will have rooted in place when the fibers deteriorate one year later. Plastic ties and monofilament are alternatives. Hot-glue guns are another choice; place a dab of glue on the rhizome or pseudobulb and hold against the tree for a few seconds. Position the orchid so the flowers can be enjoyed from a patio, walkway or inside the home. Match aesthetics with cultural needs.
Provide adequate care, especially during the first few months. Mist with a hose or run a sprinkler line up into the tree. Established plants are almost carefree, although periodic applications of water and fertilizer are beneficial. When it is necessary to prune trees on which orchids grow, take care not to injure them. Once established, orchids last for many years.

Irrigation: In nature, the roots of Cattleya bicolor are exposed to a rapid cycle of wetting and drying from daily tropical storms. Cultivated orchids in pots must duplicate this wet-dry cycle. In general mature plants will need watering no more than once per week whereas smaller and younger plants in smaller pots will need watering more frequently, depending on the daily temperature.

Fertilisation: Cattleya bicolor are moderate feeders. In their natural habitat they are accustomed to a constantly available mild nutrient solution. This can be achieved with a dressing of organic fertiliser four times per year supplemented with a weak solution of liquid fertiliser every second week during their active growing period.

Propagation: To divide a Cattleya bicolor wait until forward growth has started to institute new roots and when the roots are 5-10mm (0.2-0.4 inch) long, divide and repot in fresh potting mixture. The section taken should have no less than 4 bulb sections each with a forward growth or eye. Place pots in medium light for about four weeks, then treat as mature plants. After potting stake the plant if necessary to hold the plant firm in the pot.

Problems: Cattleya bicolor orchid should be kept fairly dry in winter or flowering is impaired.

Cattleya bicolor plants are susceptible to spider mites, so it is important to provide ample humidity with air movement.
Treatment: Spray the infested orchids with a suitable insecticide and raise the humidity by standing the pot on a saucer of moist pebbles.

Slugs and snails like them so watch out.
Treatment: These pests are controlled using an appropriate molluscicide, both pellet and liquid forms or by hand pick at regular inspections.

Caterpillars sometimes chew the plant leaves.
Treatment: Apply a suitable pesticide to the foliage following the prescriptions on the label.

Aphids are occasionally a pest on Campanula isophylla plants.
Treatment: A heavy stream of water may be used to wash aphids off of young foliage. Also it can be used the soap sprays. Alternatively use a suitable insecticidal sprays to control these insects.

The plant failure to flower.
Treatment: Most common cause of failing to bring the plants in flower is the level of light. Artificial light work well to supplement the light quality and to increase the time to light exposure. Give to these plants no more than 16 hours a day to avoid stressing them.

Uses and display: The ornamental value of Cattleya bicolor lies especially in its fragrance. This orchid can be grown mounted on a piece of wood or on a branch tree or can be grown in clay pots or baskets of wood. Display these orchids at eye level, where its flowers can be seen up close. They suit tropical, oriental and bush garden designs.