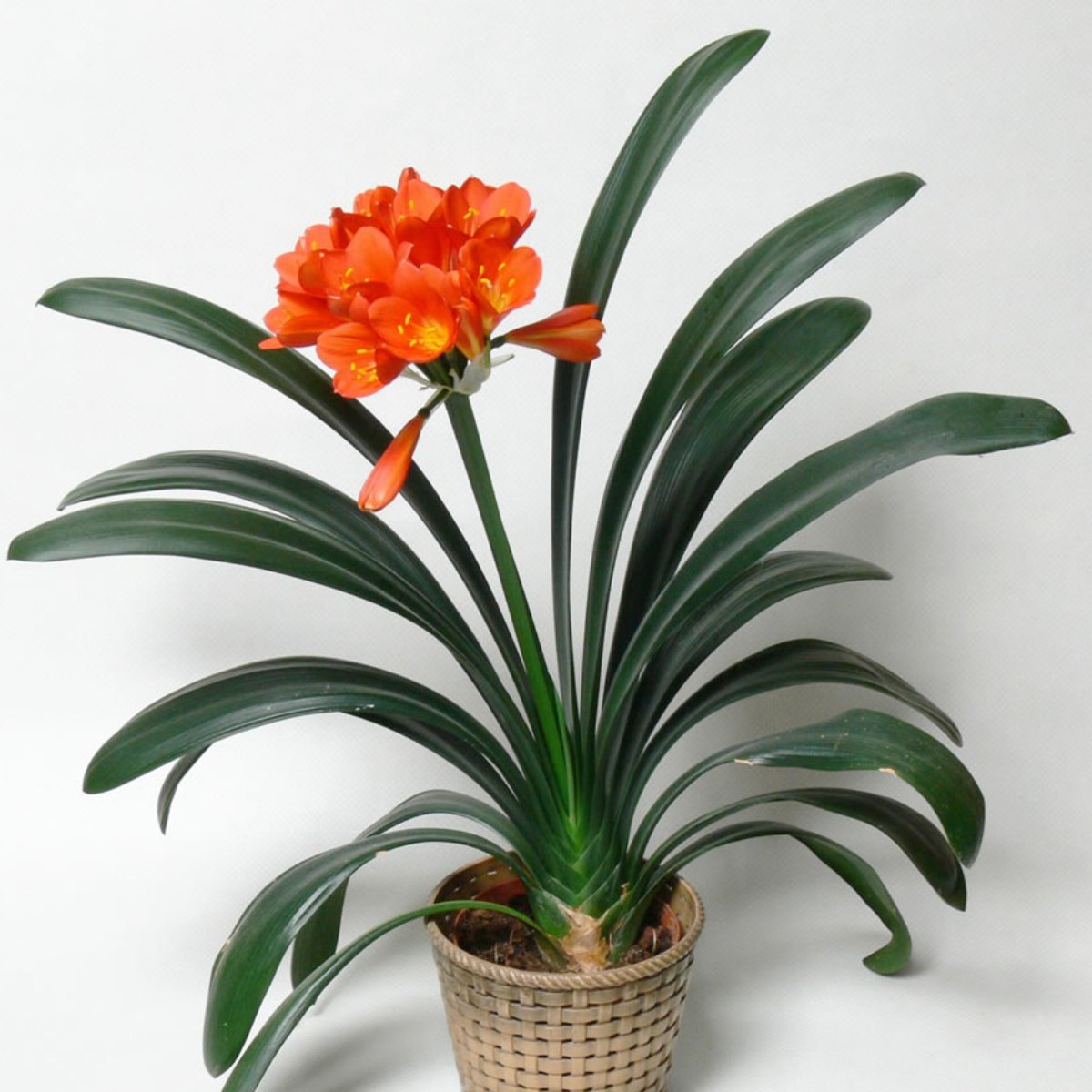 Distribution and habitat: Clivia miniata is a species of flowering plant native to damp woodland habitats in South Africa as well as in Swaziland. They are always found under tree cover in evergreen forests, growing in well-drained leaf mould rich with humus between boulders on slopes, but occasionally they may be found growing in the fork of a tree. The habitat may vary from subtropical coastal forest to ravines in high altitude forest. The Clivia miniata grows in dappled shade, often in large colonies.
Clivia miniata is also reportedly naturalized in Mexico.

Description: Clivia miniata will develop into impressive plants, but only if they are given a cool winter rest. They grow to a height of around 80cm (31 inch) with an underground fleshy stem consisting of a compact rhizome, which only rarely becomes aerial when plants are very old. Their dark green , strap shaped leaves, which vary in width from narrow to over 8cm (3 inch), fan out from a leek like base consisting of a thickly layered leaf based. The spread of a single plant can exceed 90cm (35 inch). Roots are so tick and flashy that they quickly fill the pots and some will appear on the surface of the potting mixture. In late winter thick flower stalks up to 45cm (18 inch) long begin to push up between the leaves - always slightly off-centre and each stalk will carry up to 15-20 trumpet-shaped flowers, each 5-8cm (2-3 inch) long, in the early spring, but sporadically at other times of the year. Flower colour is usually a combination of yellow and bright orange-red, but pure yellow and apricot coloured varieties are occasionally seen. The flowers are reported to have a faint, but very sweet perfume.
Clivia miniata are slow growers, so expect approximately 2-5 years for full maturity. Each stem produces one flower stock and over time produces multiple clumps, creating a magnificent flower display that lasts for weeks.
The fruits are bright orange when ripe (or golden in the case of the yellow flowered plants). The pulp should be removed from the seed when are prepared to be sown. The seeds are large with a pearly sheen and should be sown fresh for best results.

Houseplant care: Clivia miniata is a familiar house plant, long lived and fairly easy to grow and maintain. When it is in bloom, do avoid moving the plant. Wipe off the leaves with a damp cloth to keep them dust-free and shiny.
Flower trumpets fall as they fade, leaving behind embryo fruits. Remove these with a razor blade to prevent them from developing. If the embryo fruits are allowed to remain, they will grow large and absorb so much of plant's energy that the Clivia miniata will be unlikely to flower the following spring. When the flower stalk begin to winter, pull them out from the cluster of leaves.

Light: A window position that gets bright light with early mornings or late afternoon sun is ideal for cultivation of Clivia miniata. Midday sunlight can scorch the leaves. Too little light can result in a lack of flowers.
They also enjoy a period of time outdoors at summertime in a shaded position and protected from the heavy rain.

Temperature: Though Clivia miniata thrive in warm rooms during the active growth period, they must be given a short early winter rest period - six to eight weeks - ideally at a temperature slightly bellow 10C (50F). If this is not possible, they may be forced into premature bloom, with flower stalks failing to rise above the foliage. Too much warmth also shortens the life of the flowers.
Avoid mist spraying these plants to keep excess moisture off the leaves.

Watering: During spring and summer water plentifully, as much as necessary to keep the potting mixture thoroughly moist, but gradually reduce the amounts in the autumn and keep Clivia miniata almost dry during the rest period. When flower stalks appear towards the end of the winter, begin a gradual increase in quantity and frequency of watering.
Over-watering will cause root rot and kill the plant.

Feeding: Give Clivia miniata applications of a liquid fertiliser once every two weeks, beginning when flower stalk are half developed and continuing until a month before watering is curtailed.

Potting and repotting: Use a soil based potting mixture. Repot Clivia miniata only every three to four years; they flower best when pot-bound. Move a Clivia miniata plant into a bigger pot only when the roots fill the pot. Top dress in years when plants are not moved into bigger pots. Make sure to pack the potting mixture firmly around the thick roots and leave 5cm (2 inch) between the surface of the potting mixture and the rim of the pot, because the growing roots will force the potting mixture upwards. These plants can become top heavy, so it is best to use clay, not plastic pots. As a plant develops, it can be moved progressively into pots that are about 5cm (2 inch) larger. When maximum convenient size - probably 25cm (10 inch) - has been reached, top dressing every year is advisable. Carefully scrape away about 5cm (2 inch) of the old potting mixture ans replace it with fresh potting mixture which have been enriched by sprinkling of a substance such as bone meal.
Both repotting and top dressing are best done in late winter, just as flower stalks begin to develop.

Gardening: Clivia miniata grow well outdoors in a mild frost free climate. These plants are frost-sensitive and may be damaged if in a position that is exposed to cold winds especially. It takes a long time for the damage to grow out if this happens, so it is best to select a sheltered site.
The dark green, strap like leaves of Clivia miniata plants are attractive all year round and they slowly expand to form an excellent, low-maintenance groundcover in difficult shady spots. After flowering, remove spent flower stems near the base, unless seed is required.

Position: Clivia miniata plants thrive in shade, even quite deep, dry shade; in fact, their foliage and flowers will suffer if grown in too much sun. Protect them from milder frosts and hot sunlight by planting them under a tree or shrub canopy.

Irrigation: Clivia miniata appreciate watering in spring and summer during dry spells in their early days, but are tough and undemanding once established. Twice a week deep watering is enough for these plants during the active growth period and do not water them during the winter. Once they are established, they are remarkably drought hardy.

Propagation: To propagate, use the offsets that emerge through the tangle of the roots. Make sure to detach each offset carefully at the point where it meets the parent plant. Use a long, sharp knife. The best time to detach an offset is immediately after the last flowers of the season have dropped off, but not before the offsets comprises at least three leaves 20-25cm (8-10 inch) long. Plant it in an 8-12cm (3-5 inch) pot containing an equal parts mixture of peat moss and coarse sand or perlite and keep it warm in medium light. Water it sparingly, enough to make the potting mixture moist, but allowing the top two-thirds of the potting mixture to dry out between waterings. When roots appear on the surface of the mixture, move the young plant into a soil based potting mixture in a pot one size larger and treat it as an adult Clivia miniata. It will generally flower about a year after being detached from the parent plant.
When propagated from seed can take up to three or five years for plants to flower and may vary in colour. Seed will germinate in six to eight weeks at a temperature of 21C (70F), sown just under soil surface (not deep), singly in 8cm (3 inch) pots of moistened standard seed mixture. They may remain in these initial pots for up to two years before they are large enough to plant on.
Old plants can also be broken into separate crowns with the aid of a stout knife and potted up in 10 or 12cm (4-5 inch) pots. In doing this be careful not to damage the fleshy roots.

Problems:
When grown outdoors, slugs and snails can destroy the leaves and flowers.
Treatment: These pests are controlled using an appropriate molluscicide, both pellet and liquid forms or by hand pick at regular inspections.

The black and yellow striped amaryllis caterpillar (also known as the lily borer) can cause a lot of damage to the whole plant in a very short time and should be dealt with promptly.
Treatment: Use a suitable pesticide following the instructions on the label. They can also be picked off by hand and destroyed.

Conspicuous tufts of white, waxy wool appearing on the leaves indicates an infestation of mealybug, which may be troublesome.
Treatment: Use appropriate insecticides. Alternatively, remove mealybugs with an alcohol saturated cotton swab or wash plants with soapy water.

Aphids, white fly and thrips will cause a lot of damage if they are plague numbers.
Treatment: Use a systemic insecticide to disrupt their life cycle. Follow the instruction on insecticide label.

Non flowering can be due to inadequate feeding, over-watering that leads to water logging or under-watering.
Treatment: To check, knock the plant out of its container. Any dead or rotten roots should be cut away and sour, waterlogged compost replaced. It is best to error on the side of dryness for the health of the plant.

Brown patches on leaves may be due to scorching. This can occur when light is refracted through windows or water droplets collect on leave surface.

Where plants flower on short stalks and the blooms are hidden by foliage, the cause is likely to be an insufficient cool period over the winter. During the winter period keep plants at a temperature of 10C (50F).

Companion plants: The lively colour of Clivia miniata flowers combines well with other hot coloured blooms of mid-late winter and early spring which grow in part-shade, such as Camellia japonica (red camellias), Abutilon, Tropaeolum species (nasturtiums) or Justicia rizzinii (golden shrimp). The startling and unusual flower of the Scadoxus puniceus (South African paintbrush lily) appears at exactly the same time as the Clivia miniata and enjoys the same garden conditions. The colour of the Clivia miniata is also an effective partner to shade-tolerant blue or purple flowers, such as Hyacinthoides non-scripta (blubells), Brunfelsia species or Streptocarpus saxorum (sometimes called the nodding violet). In small gardens, the same colour combination can be achieved by growing Clivia miniata in a bright blue pot.
Grow Clivia miniata with Cryptanthus (earth star), Dieffenbachia species (dumb canes) and Schefflera elegaantissima (false aralia) in pots or plant it with Ficus benjamina (weeping figs) and Peperomia obtusifolia (blunt-leaf peperomias) for at least three shades of green in one vignette.

Uses and display: Clivia miniata are popular as garden plants where the climates conditions allow. These plants are extensively planted as border plants in beds or used as mass plantings. Both their leathery, deep green leaves and their showy flowers have esthetic impact in landscape. Also, they are spectacular container subjects for indoor or on shaded patios.