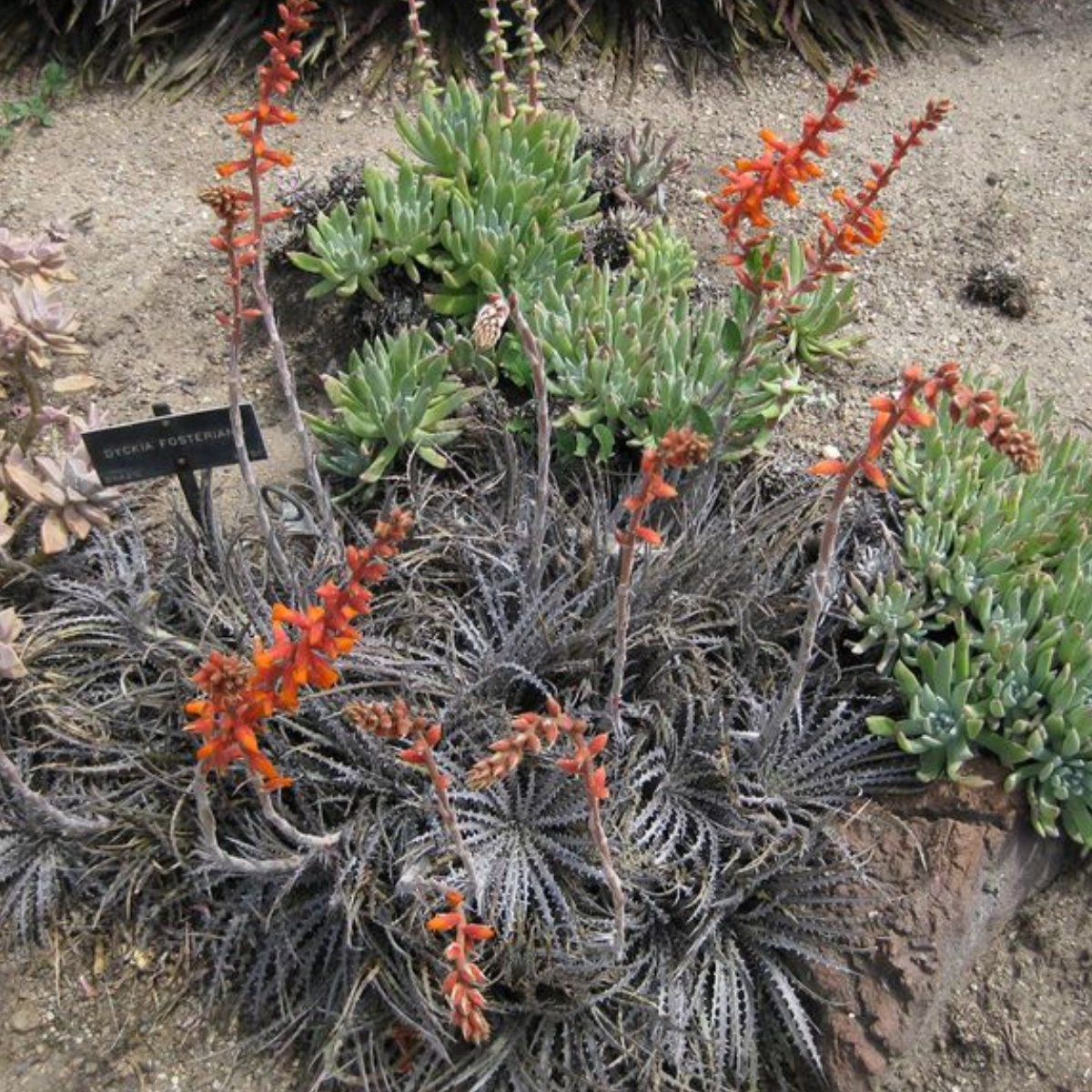 Distribution and habitat: Dyckia fosteriana are striking rare plants native to central South America, primarily Brazil. The genus Dyckia consist of 120 saxicolous (living on or around rocks) or terrestrial (growing in the ground) bromeliads species, although most are strictly terrestrial and all do well when grown as terrestrials plants.

Description: Dyckia fosteriana are spiny, stemless bromeliads resembling prickly succulents.It has shiny, stiffly arching, dull grey leaves up to 22cm (9 inch) long and 1-2cm (0.4-0.8 inch) wide, viciously armed with tiny hooked spines along the edges. In bright sunlight the leaf colour changes to rich metallic bronze. The leaves grow in a tight rosette. In the spring bell shaped flowers in orange-yellow colour and 2cm (0.8 inch) long appear on 22-30cm (9-12 inch) long, slender flower stalk. These flower stalk are rising from a side of a mature rosette - not from the centre as on other bromeliads - meaning that the plant is not dying after flowering as most other bromeliads does.

Houseplant care: Whenever possible, stand the Dyckia fosteriana in a sunny position outdoors throughout the summer months. Do not expose them to outdoors brightness suddenly, however. Instead give them a little more sunlight each day over a period of 7 to 10 days. Bring plants indoors again in about early autumn.

Dyckia fosterianawill withstand more neglect than almost any other commonly cultivated plant and still pup and bloom every year. Their only demand is a little water and a lot of sunshine.

Temperature: Dyckia fosteriana flourish in hot, dry conditions in the wild, so they are able to withstand dry indoor heat. They have no definite resting period, but grow steadily throughout periods of warmth. However they can tolerate quite cool temperatures, even as low as 10C (50F).

Watering: Dyckia fosteriana are well able to withstand long periods of drought (as well as short periods of general neglect). They do best, however, if watered moderately, enough to make the entire potting mixture moist at each watering and allowing the top couple of centimetres of the mixture to dry out before watering again. In areas where the quantity of sunlight is considerably reduced in winter, Dyckia fosteriana should be kept quite cool during the months of low light. At such times water them sparingly (no more than once a month, giving just enough each time to keep the potting mixture from drying out.

Fertilising: Apply a standard liquid fertiliser to these plants once a month during spring, summer and autumn.

Poting and repotting: Use stout gloves when repotting these plants and handle the leaves with great care. Stiffly arching leaves are liable to break off suddenly if they are not treated with considerable care.
Use soil based potting mixture with the addition of a one-third portion of coarse sand to ensure good drainage. Pots should also have a shallow layer of clay-pot fragments or other drainage material on the bottom. Move the Dyckia fosteriana into pots one size larger in the spring whenever their roots have covered the entire surface of the potting mixture. The largest pot size needed will normally be 12-15cm (5-6 inch).

Garden Culture:In an outdoor setting with considerable sunshine, Dyckia fosteriana plants may be a welcome addition to the garden.

They prefer temperatures in the range of 4-32C (40-90F), but they will withstand lower and much higher temperatures. They will not be harmed by freezing weather if they are planted in the ground and given minimal protection.

Position: They like full sunlight. The 50% shade is probably the least amount of sun that they can have and still flourish.

Water: Although they will tolerate drought, they thrive on frequent watering while actively growing as they tend to dry our rapidly during the summer time. However keep plants on the dry side during cold weather or during periods of reduced light.

Propagation: Dyckia fosteriana can be propagated in spring from offsets which appear in large number around the base of these plants. Remove the offsets with a sharp knife when they are 3-5cm (1-2 inch) across. Place each little rosette in a small pot of very sandy potting mixture (one part soil-based mixture to one part coarse sand) and keep it in a spot where it gets medium light, watering it just enough to keep the rooting mixture from drying out until renewed growth indicates that the offsets has rooted.

The plant can then be treated as a mature Dyckia fosteriana and it should be removed carefully into a larger pot of recommended potting mixture for adult plants after their roots have covered the surface area of the rooting pot.

Problems: The most common disease problem is rotting off a plant because it was over watered during the winter.

Note: Plant has spines and sharp edges; use extreme caution when handling.

Although Dyckias have no internal water storage tissue like true succulents, they are xerographic and survive long periods without water by going dormant. Their rosette of thick succulent leaves will eventually wilt, but recovery is rapid when watering is resumed.

It is a distinguish plant to be used in beds or borders.
Also it is suitable for growing in containers, thus is a hardy indoor plant.