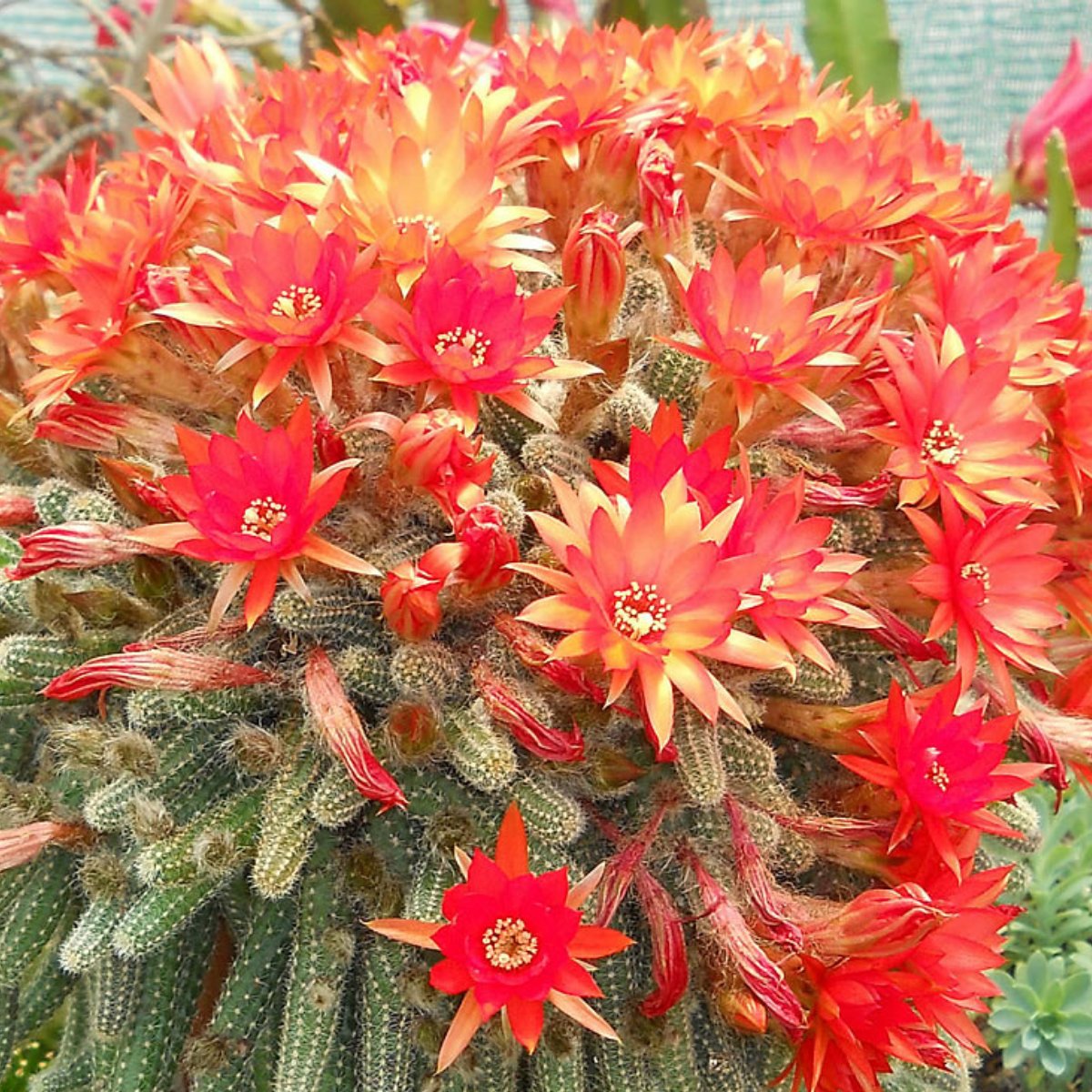 Distribution and habitat: Echinopsis chamaecereus is a species of mat forming cactus with many crowded finger-like stems from mountains areas in Argentina, occurring at elevations to over 1200m (4000 feet). Established plants can reach a height of 15cm (6 inch) and width of 30cm (12 inch), with stems.
It is one of the most popular ornamental cacti and is grown for its unique finger-like shoots and bright scarlet flowers.
In cultivation Echinopsis chamaecereus plants apparently originated from one self-incompatible clone. With a low genetic diversity these cultivated cacti resist the development of new cultivars by conventional breeding techniques.

Description: Echinopsis chamaecereus young shoots somewhat resemble peanuts. With increasing age, however, the shoots of this cactus lengthen into cylindrical finger-like stems which are pale green, very soft and segmented lengthwise by 8 to 10 narrow, low ribs with broad, shallow indentations in between. The main stems are about 15cm (6 inch) long and 2cm (0.8 inch) in diameter and they tend to lie on the surface of the potting mixture with many much smaller branches distributed among them. This cactus branches and spreads so rapidly that it will cover the surface of a 15cm (6 inch) half-pot in two years. Each of the small areoles that are closely spaced along the ribs carries 10 to 15 short, whitish spines. Deep scarlet, cup-shaped flowers about 2.5cm (1 inch) wide are produced from the areoles in early summer. Individual flowers last about a day, but the flowering period extends for two to three weeks and Echinopsis chamaecereus will produce numerous blooms during early spring to early summer period under favourable conditions.

Houseplant care: Echinopsis chamaecereus is an easy to grow cactus as it requires no special care. It flowers freely indoors if conditions are suitable.

Temperature: During the active growth period normal room temperatures are suitable. At other times this cactus will withstand temperatures down to freezing (although such an extreme is not advisable); ideally it should be given a winter rest in the coolest available position - no higher that about 7C (45F).

Watering: During the active rest period water Echinopsis chamaecereus moderately, enough to make the potting mixture thoroughly moist, but let the top centimetre (0.4 inch) or so of the mixture to dry between waterings. During the rest period give limited amounts of water depending on the temperature. If a Echinopsis chamaecereus is kept very cool - bellow 5C (41F), it may be left completely dry for the winter; if kept in warmer room, it will need just enough water to prevent the soil from becoming completely dry. In either case, the aim is to avoid stimulating the the plant into growth during the short day months of insufficient light.

Feeding: At the begining of the growth period apply a dressing of slow release fertiliser and stir into the surface soil of the potting mixture or alternatively, this fertiliser may be incorporated with the fresh potting mixture when the plant is being repotted.

Potting and repotting: Use either soil based or peat based potting mixture with the addition of -third portion of course sand for good drainage. Because this cactus has shallow root system and spreads rapidly, it is best grown in a wider container about 8cm (3 inch) deep; deep seed trays are ideal for large clumps. Move the plants into a container one size larger in the spring whenever the stems become crowded - or, alternatively, break the plant up and re-start the propagation process from cuttings.

Gardening: Echinopsis chamaecereus survives outside without protection in winter and is hardy to temperatures as low as 7C (19F) if kept dry. This cactus needs a period of cool rest in winter to produce flowers abundantly.
A rock garden may be the best spot for this small cactus to plant it in the ground. Plant Echinopsis chamaecereus between a cluster of rocks. Though it may remain unseen for many months the bright flowers in the spring will get the attention.

Position: Sun exposure should be gradual so as not to burn the plants. Best placement forEchinopsis chamaecereus is an exposure to full sun in cool climates or lightly shaded in hot climates; it is important to provide a good brightness which is necessary for the flowering period that runs from early spring to mid summer.

Irrigation: As regards the watering, Echinopsis chamaecereus have to be watered deeply every 15 days in summer and during the spring ; while in winter during the cold period is necessary to force this plant to rest, therefor the plant should not be watered at all. Avoid overwatering these plants, always allowing dry for a few days between waterings. However Echinopsis chamaecereus bears well the long periods of drought.

Fertilising: The fertiliser should be sporadic and based on a fertilizer low in nitrogen and rich in potassium and phosphorus.

Propagation: Echinopsis chamaecereus does not form seed; it is always propagated from cuttings - an extremely simple process. Remove a branch from the main stem - it can be easily detached - and place it in a 5-8cm (2.5-3 inch) pot of the kind of potting mixture in which the parent plant is growing; lay the cutting horizontally on the surface of the potting mixture. Or place several such cuttings in a large seed tray spacing them 8-10cm (3-4 inch) apart. If given the same condition as the parent plant, new growth will soon be produced and the young plants will probably be ready to flower by the following summer.
While the plant is being handled, small branches often break away from the main stem. These need not be wasted for they will root at almost any time. Unlike the cuttings taken from most cacti, these do not need to dry out for a few days before being potted up; the points of attachment of the branches are so narrow that there is little risk of rot at cut surface.

Problems:
Echinopsis chamaecereus is very sensitive to the attack of mealy roots and cochineal insects (also known as mealy bugs).
Treatment: Root Mealy Bug - Remove all soil and destroy it. Wash the roots thoroughly and treat (eventually immerging the whole plant) with adequate insecticide, letting the roots dry after treatment and before replanting in completely fresh, sterilized soil. Always cleanse and sterilize frames and all other items used when replanting. Regular applications (weekly for several weeks) of insecticide watered into the soil are also effective, it is also possible to immerse the plant pot up to the top of the soil in a bucket of insecticide solution.
Cochineal insects eradication can be easily achieved by spraying them with Neem Oil, following the manufacture directions. Eradication is most effective during the winter months. No scrubbing is required in order to kill the cochineal insects.

Cacti are particularly susceptible to rot caused by fungi or bacteria. Watch out for soft brown or blackish marks on the stems, especially in places where there has been some local damages.
Treatment: Cut away such indication of rot as soon as they appear. Otherwise, the rot is bound to spread. Be sure to cut right back to healthy green tissue and dust with sulphur. Rotting at the base of the cactus is usually caused by compacted, over-wet potting mixture. If a sufficiently porous mixture is used, this should not occur. If it does occur, however, remove all infected tissue from roots as well as stems and treat what remains of the plant as a cutting.

Recommended varieties:
Echinopsis chamaecereus f. lutea (Yellow Peanut) has stems that are pale yellow instead of green. This varieties is abnormal in that it does not possess chlorophyll (the green food producing material characteristic of plant life). Thus it cannot be grown on its roots and must be grafted on another cactus, such as a Cereus species. In all other respects - including the production of scarlet flowers, which look particularly attractive against the yellow stems - the plant is distinguishable from the normal Echinopsis chamaecereus. Though it cannot, obviously, be propagated from cuttings, amateur growers can buy young plants that are already grafted.
The tender body of this abnormal form needs shade from summer sun to prevent scorching. Grafting stock determines minimum temperature plant can stand but average is about 10C(50F).

Uses and display: Echinopsis chamaecereus is an easily grown cactus, suited to hanging baskets as well as pots. Because of its small size it is also good for succulent dish gardens. Also can be used for rock gardens. This cacti are drought-tolerant being suitable for xeriscaping.