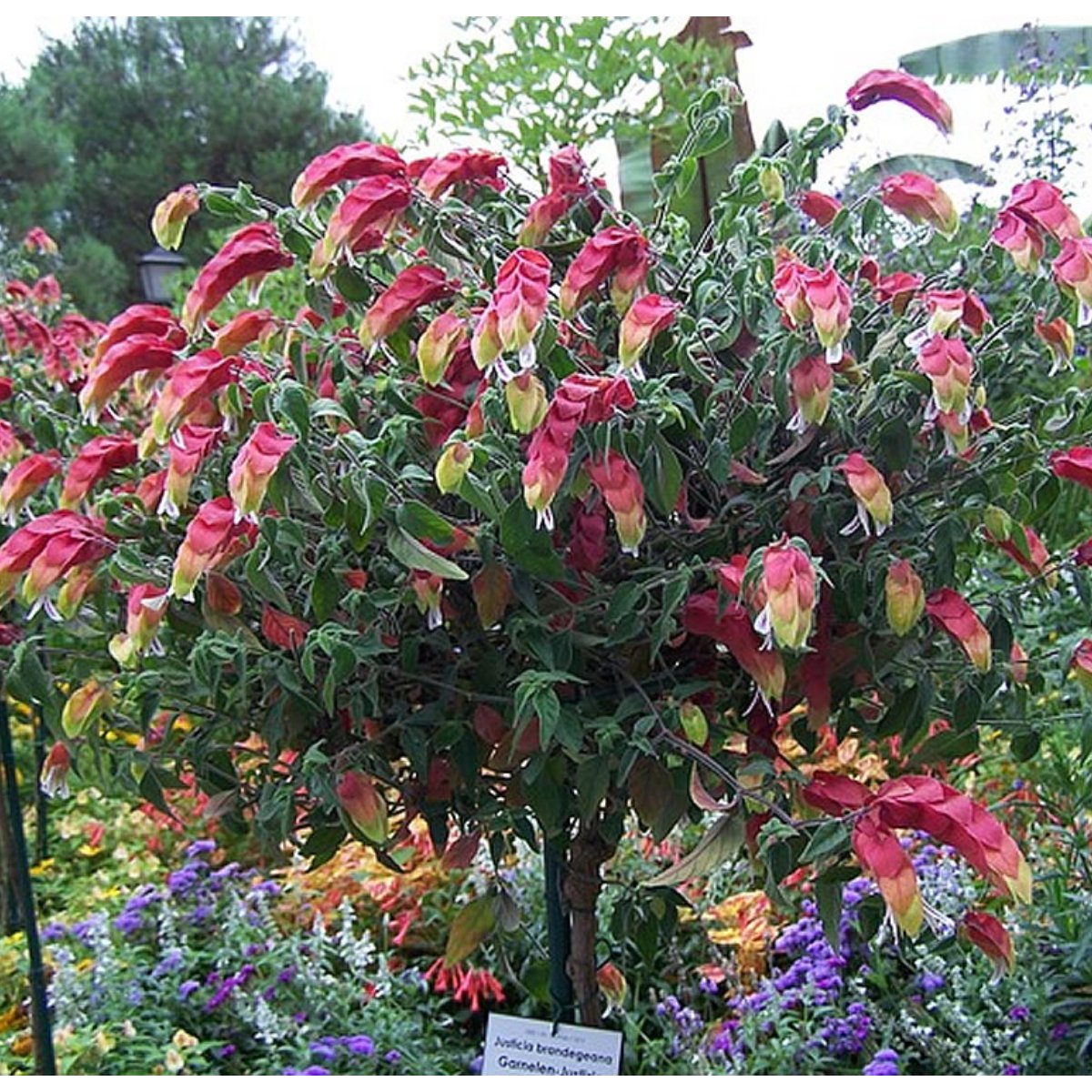 Distribution and habitat: Justicia brandegeeana is an evergreen shrub native to Mexico and also naturalized in Florida. It is a sprawling, suckering, tropical evergreen shrub which grows to 1m (3 feet) tall (rarely more) with spindly limbs. This shrub is cultivated for its very decorative flowers and long lasting flowering season.
Pollination is usually by hummingbirds.

Description: Justicia brandegeeana is a perennial shrub and will last for several years. It has become a quite common indoor plant. It is popularly known as Shrimp Plant because of its drooping, shrimp-like flower spikes. The most prominent parts of these spikes are terminal bracts, which are heart-shaped, reddish brown or pink and up to 2cm (0.8 inch) long. The bracts almost conceal white flowers that protrude from between them. The 10-13cm (4-5 inch) long flower spikes are produced continuously during the growing season, which lasts for as much as 10 months a year.
The leaves, which have 2-3cm (0.8-1 inch) long leaf stalk and are carried on upright woody stems, are 2-8cm (0.8-3 inch) long, oval, fresh green and slightly hairy.
Unless Justicia brandegeeana is kept well trimmed, it tend to become a rather untidy shrub; also, if it is left alone, it usually grows over 60cm (24 inch) tall. It therefore needs cutting back annually if it is to hold its shape and retain a manageable size at the same time.
This shrub is expected to last for 10 to 20 years.

Houseplant care: Justicia brandegeeana thrive in containers and survive well as houseplants with a long flowering season. Apart from periodical pinching out of growing points to encourage bushy growth, mature Justicia brandegeeana require cutting back annually. Cut away up to half the top growth (down to any leaf axil) just as the plant is beginning to make new growth in the spring.

Light: Bright light with some direct sunlight is essential for satisfactory production of the colourful bracts.

Potting and repotting: Use a soil based potting mixture with the addition of a one third portion of peat moss. Move these plants into pots one size larger every spring until the maximum convenient size - probably 15cm (6 inch) - have been reached. Thereafter top dress the plant annually with fresh potting mixture.

Gardening: Justicia brandegeeana is winter hardy to hardiness zones 9 to 11. Roots may survive in zone 8. Frosts will kill it to the ground, but it comes back in spring. As it dislikes temperatures below 7C (45F), it is best grown under glass in cooler temperate areas, where it is excellent as a potted houseplant, owing to its ability to tolerate low light and some neglect. The plants grown in containers may be overwintered in a warm sun room or watering can be severely reduced to force plants into dormancy for winter storage in a dark, cool, dry location. Alternatively, Justicia brandegeeana can be treated as a fast-growing annual plant in hardiness zone 9 or colder.
The shape is generally long and spindly. If trimmed back regularly, it can maintain a bushy habit and will not need support. If the branches are allowed to grow long, they will become unable to support themselves and sag towards the ground. Prune annually after flowering for a more compact, formal appearance and to encourage branching. Keeping the shrubs tip pruned will promote fullness as well as increase flowering.
These plants grow quickly and may form buds in the first year.

Position: Justicia brandegeeana can handle a variety of environments, more sun on the coast, more shade inland. Plant it in full sun to partial shade in sheltered, frost free spot in cold climate. The colourful flower bracts tend to bleach out in full sun, so these plants are generally best grown in part shade with some protection from hot afternoon sun. Bright light with some direct sun is ideal for bloom formation. This plant thrives in the shade in tropical areas.

Soil: Plant Justicia brandegeeana outdoors in fertile, moist, well-drained soil. It does best in well-drained sandy or loamy soil, but will tolerate most soil types which drain well.

Fertiliser: Feed with a general purpose fertiliser before new growth begins in spring.

Propagation: Tip cuttings 5-8cm (2-3 inch) long will root easily in spring. Insert each cutting in a small pot containing a moistened mixture of equal parts of peat moss and coarse sand or perlite. Enclose the pot in a plastic bag and keep it in a bright filtered light. Rooting should occur in six to eight weeks. To produce a bushy plant, pot three or four cuttings together in the recommended potting mixture for mature Justicia brandegeeana. Water sparingly and do not move the pot into direct sunlight for another month or two.

Problems:
Yellow leaves are caused by overwatering.
Treatment: Allow the soil to dry out almost completely before watering again and always use a pot with a drainage hole to prevent soggy soil. Water less in winter.

Leaves may drop if soil is either too wet or too dry.
Treatment: Test the soil by pushing a stake into the potting mixture. If the stake is dry, the plant should be watered. If the stake is too wet can be caused by poor drainage, cool conditions and oversized pots.

These plant are susceptible to fungalleaf spot and rust.
Treatment: Apply fungicides and repeat the treatment as directed on fungicide instructions. Provide adequate air circulation andwaterthe plants in the morning,so plants get a chance to dry out during the day.

Watch for whiteflies and spider mites, particularly when grown indoors.
Treatment: Successive sprays of insecticidal soaps or white oil will eradicate whiteflies infestations. For spider mites, spray with a suitable insecticide and raise the humidity by standing the pot on a saucer of moist pebbles.

Pale leaves is usually caused because the plant is lacking food.
Treatment: Feed the plant.

Drop or pale flower heads is because the plants need more light.
Treatment: Move the plants to a brighter location.

Companion Plants: In a location with filtered shade, plant near an exotic fern, such as theDicksonia antarctica (Tasmanian Tree Fern) or groundcover Nephrolepis exaltata (Sword Fern).
Can also be used to cover the unattractive base of tropical foliage plants, such as Ensete ventricosum (Abyssinian Banana) or Philodendron x 'Xanadu' (Xanadu Cut-Leaf Philodendron).
They can be folded in among Zingiber (Gingers), Musa (Bananas) and Canna species (Cannas) for a contrasting look. Also Justicia brandegeeana can be associate with Begonia (Begonias), Porphyrocoma pohliana (Brazilian Fireworks) or Curcuma longa (Curcuma).

Uses and display: Justicia brandegeeana are grown as ornamentals in tropical and subtropical gardens and as conservatory plants in temperate areas. These showy perennials are good plants for mixed borders and beds where they produce masses of ornamental flowers. These plants are great display anywhere a splash of continuous colour is needed since they bloom almost all year long. They will display the best color when planted in a bright location that receives direct sunlight. In cooler climates, Justicia brandegeeana plants can be grown in containers and brought indoors for overwintering.
Although featured this striking plant in the garden, Justicia brandegeeana can be used in different settings. Their lush foliage and distinctive flowers make them a natural for a tropical garden. They are also showy and long-blooming enough to feature by themselves in a large container or as a focal point in a part-shade location.