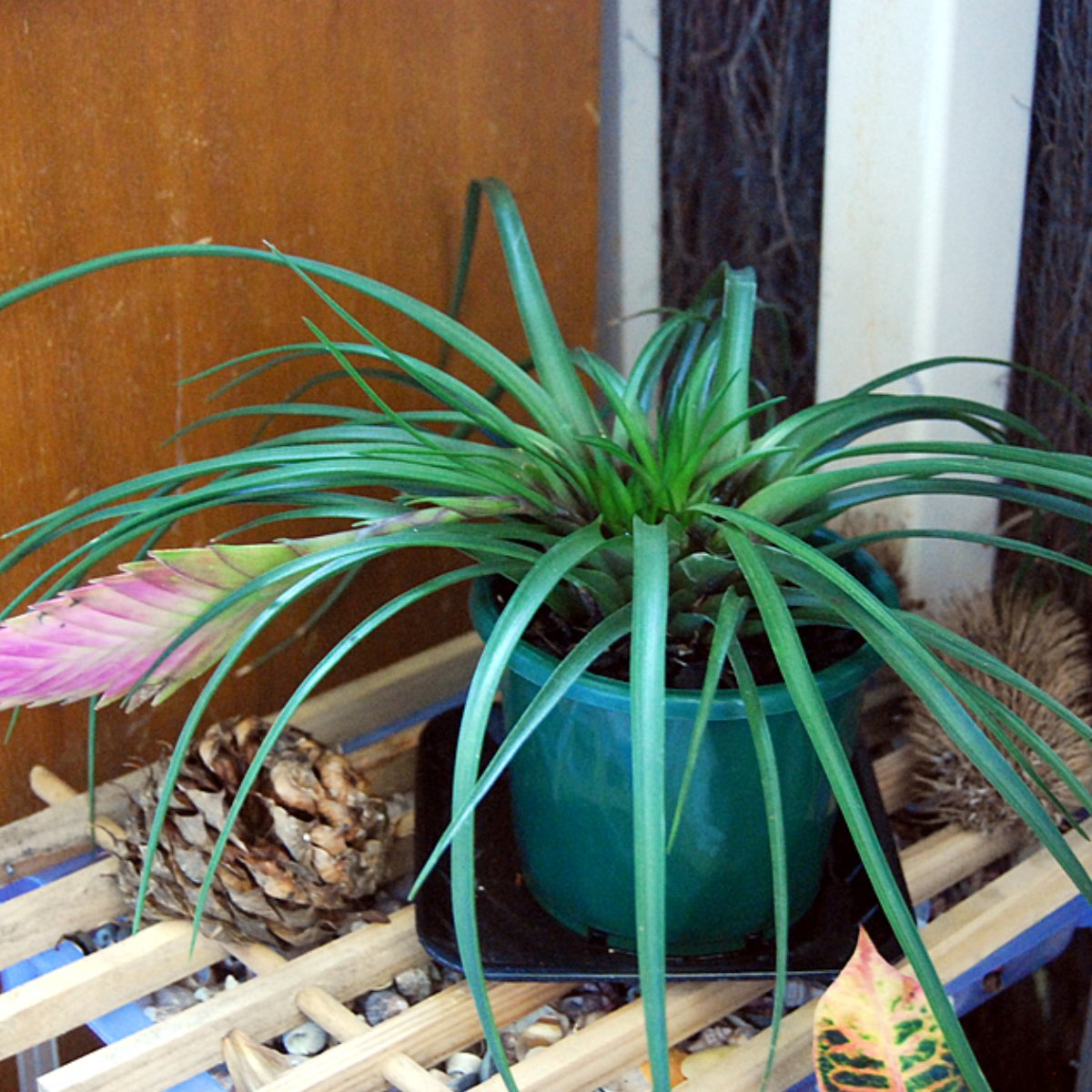 Distribution and habitat: Tillandsia cyanea is a species of flowering plant in the bromeliad family. It is growing to 10cm (4 inch) high by 40cm (16 inch) wide and has stemless rosettes of thin, recurved leaves and paddle-shaped spikes of 20 pink bracts with violet flowers, in spring and autumn.
Tillandsia cyanea areperennial epiphytes in their native rainforests of Ecuador and have small roots, mainly used for anchoring themselves on trees. Because the roots do not drink up water, these tree-dwelling plants gather moisture and nutrients through their leaves.

With a minimum temperature of 7C (45F), Tillandsia cyanea is often cultivated as a houseplant in temperate regions.

Description: Tillandsia cyanea has many 30-45cm (12-18 inch) long and 1-2cm (0.4-0.8 inch) wide leaves. These narrow, pointed-tipped leaves are arranged in a loose rosette. Their colour is grey-green with reddish brown, lengthwise stripes on the underside. A 5-8cm (2-3 inch) long flower stalk appearing from the centre of the mature rosette carries a fan-shaped flower head 10-15cm (4-6 inch) long and 5cm (2 inch) wide. This hard flower head , which last for up to 10 weeks, is composed of a number of smooth, overlapping, rose-coloured bracts. The actual flowers, which appear singly from the notches formed on the edge of the flower head by the overlapping of the bracts, are tubular flaring out into three broad petals. Flower colour is bright violet-blue and each bloom measure about 5cm (2 inch) across.

As with most with bromeliad rosette, the rosette flowers only once and then gradually dies. Offsets are produced from leaf axils and these may be either used for propagation or left in the pot after the withered rosette has finally been detached.

Houseplant care: After flowering old bracts can be removed, new plants will then form. Tillandsia cyanea plants will bloom when they reach maturity, usually in 2-3 years. Like other bromeliads, they will bloom once then produce offsets. Propagating the offsets make the collection of plants to last many years.

It is important to clean old dried leaves and flowers and watch the plants for insects attacks.

Tillandsia cyanea will grow well, but will not flower if kept in dark.

Temperature: Tillandsia cyanea will grow actively throughout the year if the temperature is kept above 15C (59F), being suitable for warm environments with temperatures that does not drop below 13C (55F).

For increased humidity, it is a good idea to stand the potted species of Tillandsia cyanea on trays of moist pebbles and spray mist them two or three times a week.

Water: The negligible roots of Tillandsia cyanea need very little water. If the foliage is most sprayed regularly as advised above, enough water will seep into the mixture.

If possible use rainwater or filtered tap water for misting Tillandsia cyanea. It is generally recommended to water the leaves morning and evening, there would be no problem if they are watered only once a week or even once in 10 days.

Fertilising: Give a half-strnght dose of standard liwuid fertiliser to potted Tillandsia cyanea once a month.

Potting and reppoting: For Tillandsia cyanea use one of the potting mixtures recommended for bromeliads, a potting mixture that is porous, spongy and almost lime-free. Satisfactory mixture often consist of equal parts of coarse leaf mould and peat moss or equal parts of free-lime soil-based mixture and peat moss. These plants will flower from offsets in 10cm (4 inch) pots and do not need to be moved to bigger ones.

Propagarion: Remove offsets of Tillandsia cyanea from the parent plant at any time after their leaves have attained a length of 8cm (3 inch). Plant each offset in a 5-8 cm pot containing an equal-parts mixture of peat moss and coarse sand or perlite and enclose the whole in a plastic bag or propagating case. When roots have developed, treat the young plant as a mature specimen. Transfer it into a 10cm (4 inch) pot of standard bromeliad mixture about six months after the start of propagation.

Aphids may be a problem.
Treatment: Remove and destroy badly distorted plant growth. Keep the plants clean and use pesticide to combat the insects.

Recommended varieties:
Tillandsia Cyanea 'Paradise' is the best form of Tillandsia Cyanea ever produced; flower bracts last up to 6 months in colour and produce 5cm (2 inch) blue flowers over a 6 week period.

Uses: These curious plants may be grown outdoors as long as temperatures do not drop below 7C (45F). It can be mounted on a piece of coarse bark, in the crotches of trees or among hanging baskets of orchids.

Unlike other plants in the air plant genus (Tillandsia spp.), which grow without soil by attaching themselves to trees and branches,Tillandsia cyanea may be grown directly in a container with potting soil.

Interesting facts: Tillandsia is a large group of evergreen perennials that may be either epiphytic, terrestrial or rock-dwelling and are a member of the bromeliad family which contains over 3,100 species, as well as forming part of the tillandsioideae subfamily. It is in the tillandsia genus (air plants), which contains around 540 species.

When tillandsia attaches to a tree the host plant is not damaged by its presence, as tillandsia takes its nutrients from moisture in the air, not the tree itself.