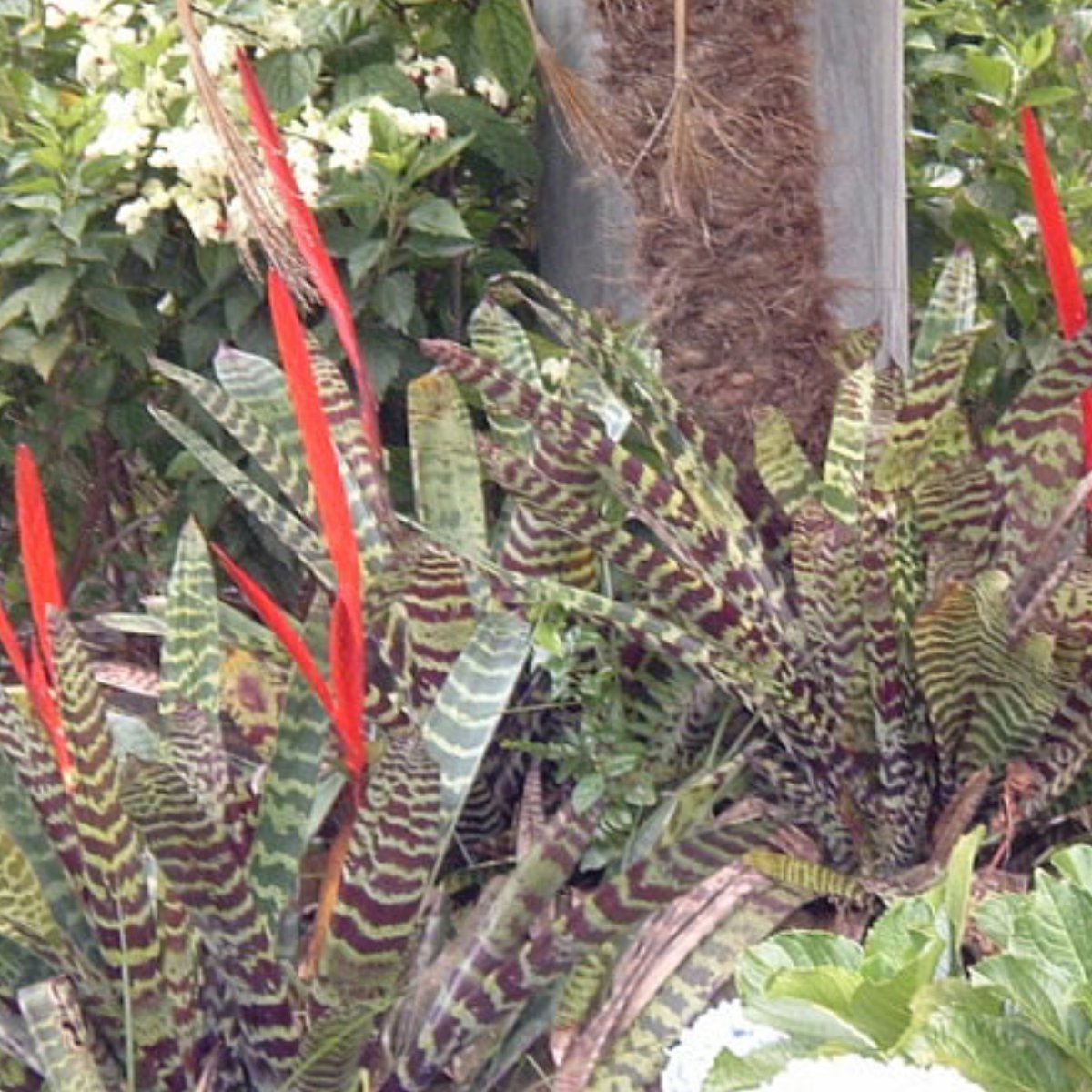 Distribution and habitat: Vriesea splendens is native to Venezuela andTrinidad, Guiana and Suriname. In its natural habitat Vriesea splendens is growing terrestrial among the roots of trees in soil rich in leaf mould, but mostly it is founded growing epiphytic in dense forests in shady wet areas. It has the typical bromeliad rosette form and water vase.

Description: Vriesea splendens is prized for both its handsome foliage and its showy flower spikes, being one of the showiest and dramatic bromeliads. It has stiff, sword-shaped leaves with smooth edges arranged in a loose rosette that is capable of holding water in the rather cup-like centre. The rosette is composed of about 20 leaves 38cm (15 inch) long and 3-5cm (1-2 inch) wide, that are dark green with purple-black cross-banding.
Like other bromeliads, Vriesea splendens do not flower until it is three to five years old. Its strongly coloured, usually erect, sword-shaped flower spikes, which can be produced at various times of the year depending on conditions, are very long lasting - an effect largely derived from brilliant bracts rather than the short-lived flowers. The flower spike up to 60cm (24 inch) tall is capped by a 30cm (12 inch) long flattened blade of brilliant red overlapping bracts; 3-5cm (1-2 inch) long yellow tubular flowers emerge from this. The spike persists for several months, after which the plant slowly declines while producing one or more offsets.

There are many forms of Vriesea splendens, some with darker foliage, same with larger or differently shaped flower spikes.

Houseplant care: Vriesea splendens are suitable subjects for growing on a bromeliad tree: the roots are wrapped in a ball of sphagnum moss and wired on to a dead branch or piece of driftwood. They must not be allowed to dry out and will need foliar feeding.

Thesebromeliads are not as easy to grow as some other bromeliads, but they will succeed when provided with bright light, warm temperatures and moderate to high humidity.

Light: Vriesea splendens must have bright light with three or four hours a day of direct sunlight, in order to flower. Do not subject them to scorching midday sun, however.

Temperature: Vriesea splendens need normal temperature and high humidity; to increase humidity it is recommended to place pots on trays of moist pebbles. Protect this bromeliad from temperatures below 10C (50F).

Watering: Water actively growing plants plentifully by filling the central cup of the rosette until water spills over into leaf axils and seeps through to the potting mixture. During the short day monthsVriesea splendens may rest and they should watered just enough to make the potting mixture barely moist.

Refill the water vase every two weeks with fresh water. Spray leaves weekly. Use soft water if possible. Allow water to stand for several hours before using it.

Feeding: Give all actively growing plants half-strength liquid fertiliser about once a month. Apply the fertiliser to both the potting mixture and central cup. Do not fertilise during the rest period.

Potting and repotting: Use the mixture recommended for bromeliads. Two possible potting mixture consist of equal parts of coarse leaf mould and peat moss or equal parts of lime-free, soil based mixture and peat moss. Repot Vriesea splendens only when roots fill their pots - every two or three years - this is best done in spring. The largest pot size required is 13cm (5 inch). When reppoting these plants, do not pack the potting mixture too firmly; roots cannot penetrate heavy soil.

Gardening: Vriesea splendens prefer a sunny to half-shady situation on moderately moist soil. They are hardy to zone 10. It can be planted in the ground in a humus rich soil or attached to the side of a fern tree. In summer the plants prefer moderate humidity and need protection from direct sunlight. Bring this bromeliad inside during winter months. Propagate a new plant from the pups when the parent plant is close to expiring.

Propagation: Around flowering time, Vriesea splendens will produce offsets either from leaf axils or around the base of the rosettes. A basal offset should be from 8-15cm (3-6 inch) long (depending of the mature plant size) before being detached with a sharp knife; retain roots if they have already been produced. Plant the offset in an 8cm (3 inch) pot of moistened standard mixture for bromeliads, enclose it an plastic bag and keep it in warm room in bright filtered light until roots are established (in about four to six weeks). There after, treat the young plant as recommended for mature Vriesea splendens.

Offset arising from leaf should not be detached but allowed to grow in natural way. They will take over from the parent (which after having flowered, slowly dies) over a period of about a year.

Also Vriesea splendens can be propagated from seed. The seeds need to be freshly gathered since they lose their viability quickly. Sow the seeds in spring and use shallow pan or half-pot filled with mixture of two parts of peat moss to one part of coarse sand. Sprinkle the seeds thinly and evenly over the surface, pressing them down lightly without burying them. After thoroughly moistening the potting mixture, place the container in a plastic bag or heated propagating case. If it is kept at a temperature of about 24-27C (75-81F) fresh seeds will germinate in a week or two.
Leave the seedling still enclosed in the bag or case, in a warm position that gets bright filtered light until they have made three or four leaves. Once the leaves have appeared, gradually allow more air to the bag or case to accustom the seedlings to normal room conditions over a period of 7 to 10 days. After the seedlings are fully uncovered, begin to water them moderately allowing the top centimetre (0.4 inch) or so of the potting mixture to dry out between waterings; start feeding once a month of liquid fertiliser at half strength. When the seedlings have made at least six leaves, pot each young plant in a 5 or 8cm (2-3 inch) pot of one of the recommended potting mixture for adult bromediads and treat them as mature plants.

Problems:
Brown patches on leaves may be caused by exposure to direct sunlight.

Also, leaf blotches can be a sign of a fungal or bacterial infection. Bacterial spots are rather angular and yellow-rimmed while fungal spots usually are rather rounded with an area of fruiting bodies.
Treatment: Destroy affected parts, additional apply fungicide in fungal infection cases.

Brown tips on the leaves usually indicate insufficient humidity in air or the bromediad vase has not been filled with water.

Scale insects that sit on the undersides of the leaves and excrete honeydew.
Treatment: Scale insects can be controlled with insecticide.

Rotting at the base may be due to overwatering of the potting mixture.

Rotting at the base, if the plant has flowered, may be due to natural death of the parent rosette, however.

Uses and display: Vriesea splendens is suited as container plant and as indoor plant. The vibrant leaf colors make this bromeliad a unique focal point, even when the plant is not in bloom. Since the spread of this plant is wide, a good location is a raised platform or plant stand, with other low-light plants used as accents beneath. It is widely used as a container plant in indoor commercial sites.
Vriesea splendens can be grown as an epiphyte plant mounted on a piece of bark or a tree branch. The young Vriesea splendens arise from seed can be used for bottle gardens or terrariums as this bromeliad is a slow grower.